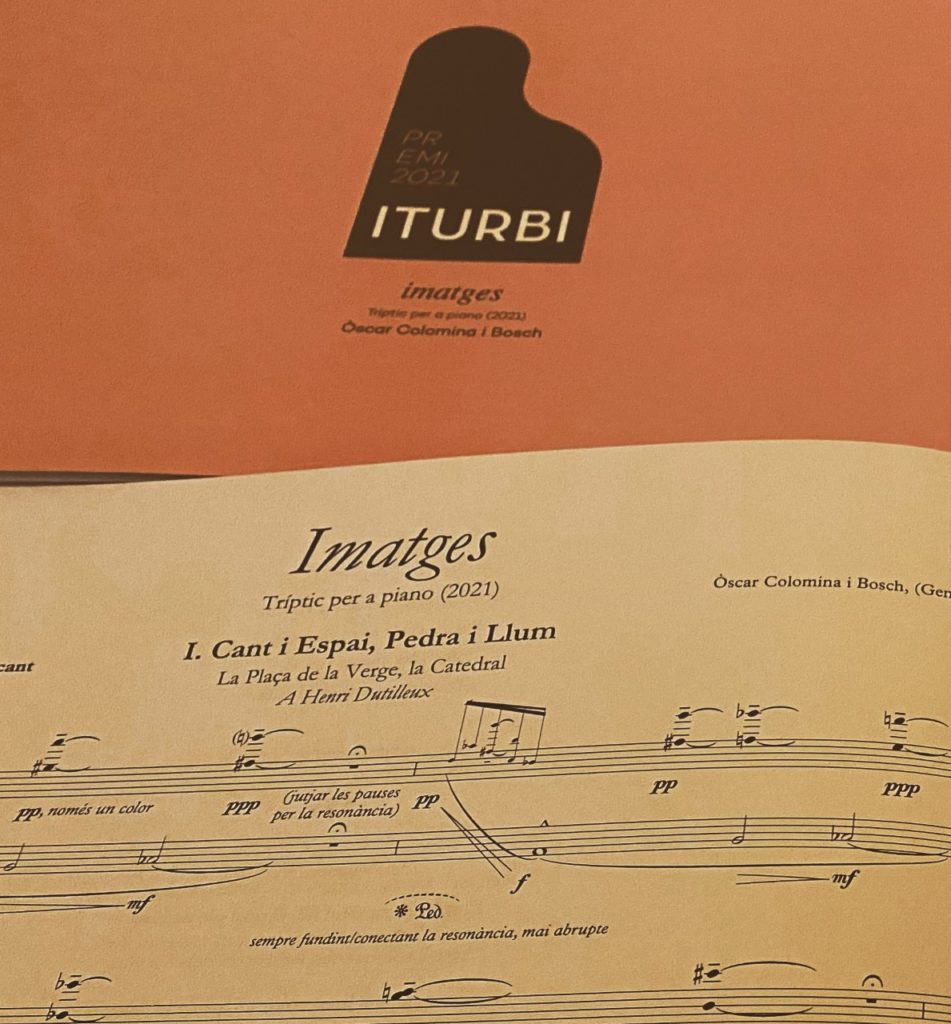 Instructions to follow the competition’s semifinals online, and how to get free tickets if you are in València

Composer in Residence of the 2021 Iturbi Competition

Imatges, was commissioned by the Diputació de València and the Iturbi International Piano Competition to be the contemporary work for the competition’s 40th anniversary edition.

Imagined in Massarrojos (València) and finished in Madrid (January 2021), Imatges is a collection of three pieces which were inspired by famous landmarks in the city of València and its surroundings, and by the sensuous poetry of Vicent Andrés Estellés (Burjassot, 1924 – València, 1993). Each of the pieces pays homage to a 20th century composer: Henri Dutilleux, Xavier Montsalvatge and György Ligeti. Although the treatment of the material is diverse, there are many threads (melodic, harmonic, rhythmic) connecting the pieces.

The piece will receive its premiere in the Semifinal of the Iturbi Competition, where the full triptych will be performed by the ten semifinalists. The performer is always free to choose the order in which the pictures are to be played.

The Semifinals will be broadcast live from the Teatre Principal in València, on the 27 & 28 of June, 2021.

The live broadcast of the semifinal will be available in the Vimeo channel of the Diputació de València, click HERE.

You can reserve your free tickets here: www.servientradas.com.

I. Cant i Espai, Pedra i Llum (Song and Space, Stone and Light)

This piece is inspired by the city’s Cathedral and its neighbouring Plaça de la Verge (the Virgin’s Square). Echoing the Cathedral’s amalgam of various styles, Cant i Espai grows and develops in parallel to the evolution of Western polyphony. It starts with an intervallically modified version of the Gregorian chant Ave Maris Stella (Hail, Star of the Sea), which serves as a basis for polyphonic transformations. After reinterpreting Romanesque and Gothic techniques, the music portrays the impression of entering the Cathedral, the immensity of the empty space and the light created by the huge Gothic lantern (the Cimborri, with its thin marble-leaves in its glass windows, which bath with a distinctive, milky light the whole space). At the end, as the listener is standing in the middle of this imagined musical space, the sound of a small, distant bell is heard, coming from outside the building.

This second piece is inspired by the Malvarrosa Beach, the city’s iconic urban beach (famously portrayed by Sorolla in numerous of his paintings) and by L’Horta (the historical farming area around the city of València). The music takes the main melodic material from the Albà, a traditional vocal form developed in L’Horta to accompany religious festivities, and which is sung all night until dawn (Alba) arrives.

The final piece of the set is based on the Marble Gate of the Palace of the Marquise of Dos Aguas (Portada del Palau del Marqués de Dos Aigües). The structure of this alabaster sculpted portico comprises a bottom part with two twin sides framing the entrance (representing World elements: harvests, water, etc) and an upper, unified part which represents the heavens and which converges into an urn where the image of the Virgin is displayed as a central piece. The gestures and structure of the musical piece follow these structural elements: earthy and violent ascending canons open the piece and are strictly mirrored in the second section, but shaped into a descending, watery cascade of sounds. An airy, immaterial and silvery sounding contrasting section, finishes with all lines converging and focusing into a single, central point.