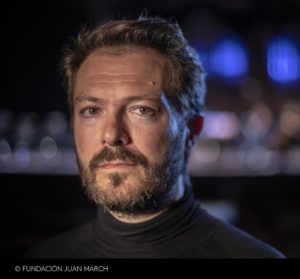 Dean of the Escuela Superior de Música Reina Sofía in Madrid since 2020, Òscar is a sought-after composer and conductor. Before relocating to Spain, he held important positions in the UK as Director of Music of The Yehudi Menuhin School (2017-2020) and Professor of Orchestration at the Royal Academy of Music (2013-2020). He has guest conducted and lectured at the Royal Conservatoire of The Hague – School for Young Talent,  the Akoesticum Talent Programme in Holland, and is part of the teaching faculty of Porto PianoFest.

A commission from the Yehudi Menuhin International Violin Competition, Shpigl for solo violin (2016), was described by American composer John Adams as ‘a small masterpiece of both musical and dramatic imagination’. Impressed by the piece, Adams programmed Shpigl in the Los Angeles Philharmonic Green Umbrella Series  ‘Noon to Midnight’ festival, inviting Òscar to attend the American premiere in the Walt Disney Concert Hall, Los Angeles.

Imatges (2021), written for the Iturbi Competition, has already received performances in Washington, New York and Hannover, with composer Benet Casablancas considering it ‘an important addition to the Spanish Contemporary piano repertoire’.

He has orchestrated works for Heinrich Schiff and the Kremerata Baltica (Gewandhaus, Leipzig 2009) for the Yehudi Menuhin International Competition (Beijing, 2012) and has enjoyed composition residencies at the Iturbi International Piano Competition (2021), London’s Barbican Pit Theatre (2011), the Joven Orquesta Internacional Ciudad de Oviedo and in Cove Park (Scotland). In 2014 he was a jury member for the Valencia International Wind Band Competition.

As a conductor, Òscar was engaged to conduct the Orquesta de Valencia in the ENSEMS International Festival 2017, and has appeared in the Gstaad Menuhin Festival, Fundación Juan March and the Pau Casals International Festival. Recently invited to conduct the Youth Orchestras of the Bogotá Philharmonic Orchestra, he has conducted orchestras and ensembles including  the Royal Academy of Music New Music Ensemble, The Yehudi Menuhin School Orchestra, the Royal Conservatoire of the Hague – School for Young Talent’s Atheneum Kamerorkest, Camerata XXI Chamber Orchestra, Orpheus Sinfonia (London) and the Conservatorio Superior de Castilla y León’s New Music Ensemble.

Òscar is an Associate of the Royal Academy of Music, an honour awarded to alumni who have made a significant contribution to music and society.