Premiered at the Royal Academy of Music in April 2016 as part of the Yehudi Menuhin International Competition Junior Finals, Òscar’s Shpigl has enjoyed since performances in some of the major UK Summer Festivals, such as Gower Festival, Harrogate International Festival, Oundle International Festival and Cheltenham Music Festival, and in venues as far as Taiwan. Commissioned specially by the Yehudi Menuhin International Competition and the Britten-Pears Foundation for the occasion, Shpigl takes Menuhin’s idea of life as a journey of search and transformation and explores it musically using veiled memories of repertoire, elements of improvisation and space. 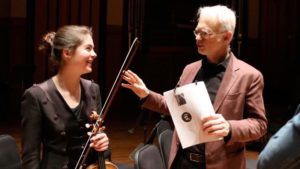 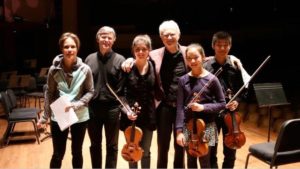 During the preparations of a group of young violinists from the Coleman Violin Studio in Seattle for the 2016 Yehudi Menuhin International Competition, violinist and teacher Simon James arranged for his students to run through the piece for composer John Adams and violinist Leila Josefowicz, in town for the performance of Adams’ violin concerto Scheherazade 2. After Marley’s performance, Adams was so taken both by the piece and by her interpretation that invited her to perform Shpigl in a concert with Los Angeles Philharmonic, which Adams conducted as part of the L.A.Phil prestigious Green Umbrella Series / Adams@70 celebrations in the Walt Disney Concert Hall, Los Angeles. 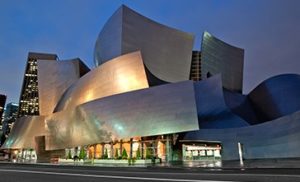 Òscar was very happy to receive the invitation and was excited to attend the US premiere of Shpigl in L.A. He is also very grateful to SGAE and to Los Angeles Philharmonic Association for their contribution towards travel costs.

‘John Adams is one of our greatest living composers, continually refreshing his art and ever pushing himself toward more ambitious goals. The LA Phil has enjoyed a long and close relationship with Adams, particularly since 2009 when he became our Creative Chair. We are proud and thrilled to mark his personal milestone with several of his landmark works, including the moving nativity oratorio El Niño and his breakthrough opera Nixon in China, semi-staged and conducted by Adams himself. He will also conduct the Green Umbrella “Four World Premieres” concert on October 1.‘ [when Shpigl received its American premiere]

·For more information about Shpigl, its background, the way it uses space and mutes and to understand more of its theatrical nature follow the link, HERE.

·And listen to Marley Erickson here perform in the Menuhin Competition rounds: