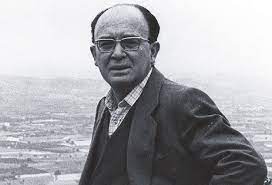 Directed by Joan Cerveró, the ensemble has given the title of La pell de brau (The bull’s skin) to their programme for this series of concerts. It will include works by Fabià Santcovsky (Æólicas y Esfíngeas, 2020), Ariadna Alsina Tarrés (Au fil du nu (Sense seguici d’ombra), 2015, revised in 2017 and 2018), Òscar’s Three Nocturnes, Lula Romero (Autonomous realities, 2021) and Helga Arias (A common sense of self, 2018, revised in 2022).

The Linos Trio first commissioned Oscar in 2009 to write a book of nocturnes for piano trio inspired by the work of various Spanish and Latin-American poets.

Written originally as a song to lyrics in Catalan by the Valencian poet V. A. Estellés, Crime is built around the singing line. The dark and lonely character of the poem inspired a particular instrumental landscape where big distances and high registers were favoured in order to portray that feeling of cold, hopeless solitude. The singing line, with its full chromaticism and intense expressivity thus becomes the focus and the emotional core of the piece. In its own way, ‘Crime’ is not too disimilar to many of Turner’s late paintings, where a small but intense burst of colour breaks through an indistinct and cold background.

The nocturne is conceived as a short, fast, nightmarish scherzo to act as the middle movement between the other two, more reflective, nocturnes. The piece takes its title from a verse from Pablo Neruda’s poem ‘The Ghost of the Cargo Ship’. The writing of the piece builds composite sonorities as an extension of an original single line; formally, ‘Rotten Wood and Damaged Iron’ is akin to certain trios of the Romantic era, weaving the material as a scherzo with a double trio.

The last Nocturne is based on a poem written in 1941 by Miguel Hernández.

‘Through the Wound’ is in essence monothematic, exploring various aspects of, and offering different perspectives on the material proposed at the opening, developing it organically. This process of continuous transformation takes the delicate, high pitched opening material, through a number of harmonic and textural variations, into a rather luminous and more defined middle section reminiscent of the soundworld of O. Messiaen. This crystallised version of the original material eventually fades away into the opening’s simplicity, this time duplicated in the two extremes of the register, bringing the ternary form to a close.

National Prize for Music in 2005, the Grup Instrumental de Valencia is specialized in the interpretation of classical works from the contemporary repertoire. Seek the transmission of knowledge with other arts besides music, such as dance or theater. Since it began in 1991, it has offered works by composers of the stature of Stockhausen, Webern, Donatoni, Boulez, Takemitsu, Ligeti, Xenakis, Schönberg and Stravinsky and by great contemporary Spaniards such as Luis de Pablo, Cristobal Halffter and Tomás Marco.
They have performed monographic commemorative concerts, stage and ballet productions with important Spanish companies and collaborated with national festivals (such as ENSEMS, the Alicante Contemporary Music Festival, the Granada International Music and Dance Festival) and international festivals (in Mexico, Romania, France, Italy, Argentina, Cuba and Venezuela).