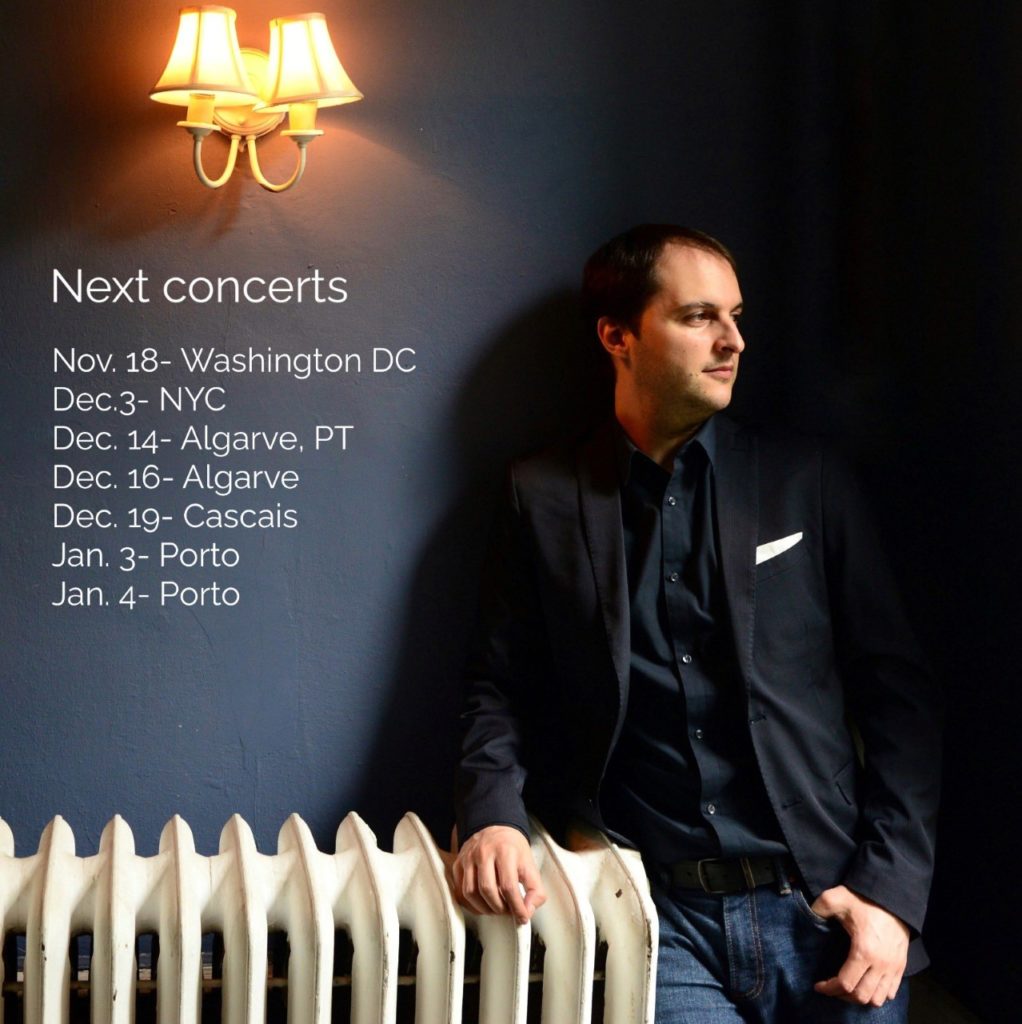 Imagined in Massarrojos (València) and finished in Madrid (January 2021), Imatges is a collection of three pieces which were inspired by famous landmarks in the city of València and its surroundings, and by the sensuous poetry of Vicent Andrés Estellés (Burjassot, 1924 – València, 1993). Each of the pieces pays homage to a 20th century composer: Henri Dutilleux, Xavier Montsalvatge and György Ligeti. Although the treatment of the material is diverse, there are many threads (melodic, harmonic, rhythmic) connecting the pieces.

The piece received its premiere in the Semifinal round of the Iturbi Competition, where the full triptych was performed by the ten semifinalists. The collection can be performed complete or separately (choosing one or two movements).

The performer is always free to choose the order in which the pictures are to be played.

Award-winning Portuguese pianist Nuno Marques has developed an extensive, international performing career from his current base in New York City, where he directs Porto Pianofest – an international piano festival held annually in Porto, Portugal. He is the festival’s founder and artistic director. A Doctor of Musical Arts, Nuno is a versatile musician, equally comfortable playing solo, chamber music, teaching, or collaborating with other forms of artistic expression.

His most recent concerts took him to renowned music halls and festivals in Europe, Asia and the US, where he played twice at Carnegie Hall, with a scheduled return in November 2019. Nuno Marques has also embarked twice on extensive concert tours in China, and has given public masterclasses in Portugal, Spain, the World Piano Congress in Serbia, Myanmar, China and the US.

As a soloist Nuno Marques has performed with the Orquestra do Norte – Portugal, the Artave Orchestra, Jovem Orquestra de Famalicão, and the Orchestra for Myanmar, where he participated in a humanitarian project with young musicians from the Rohingya minority. He has recorded for Antena2 Radio Portugal and Centro Atlântico Editora, and is a founding member of prizewinning chamber music ensembles, with whom he performed and recorded throughout Europe. With a wide interest in contemporary music, he has also performed with leading contemporary music ensembles, having commissioned and premiered many works for solo piano and ensemble.

Nuno Marques holds a Doctor of Musical Arts degree (DMA) from Rutgers University, where he studied with Min Kwon. He is also a graduate from the Guildhall School of Music & Drama in London, studying with Artur Pizarro. He completed his first Master’s Degree in piano performance at the Royal College of Music, London, with Niel Immelman; and a second Master’s degree in Instrumental Pedagogy from the Aveiro University in Portugal. Having first moved to New York to attend NYU— the Steinhardt School, under the tutelage of José Ramón Méndez— he was awarded the prestigious Reinhold Scholarship and taught classes at the NYU piano department.

Throughout his career, Nuno has had the opportunity to work with important pianists such as Lazar Berman, Irina Zaritzkaya, Vitaly Margoulis, Alexander Kobrin, and Dominique Weber; and in chamber music settings with Bernard Greenhouse (Beaux Arts Piano Trio), Takacs Quartet, Florestan Piano Trio, Gary Hoffman and Ilia Grubert.Nuno has been awarded prizes at piano competitions in London and Portugal. His studies have been sponsored by the European Union (Dfes), NYU- Reinhold Foundation, Fundação Gulbenkian and the AAMSL.

Nuno Marques founded Porto Pianofest in 2016. His excitement to support the new generation of pianists and bring the greatest musicians and mentors to his native country has brought this young festival to quick international esteem. Porto Pianofest has since expanded its activity to NYC, and will continue its model of providing performance opportunities and world-class instruction to a number of American cities in the coming year.

This season’s plans for Nuno include solo recitals, chamber performances, concerto performances, masterclasses in the US and Europe, and performances with “Stars of American Ballet”.

Nuno Marques is passionate about traveling, literature and photography.